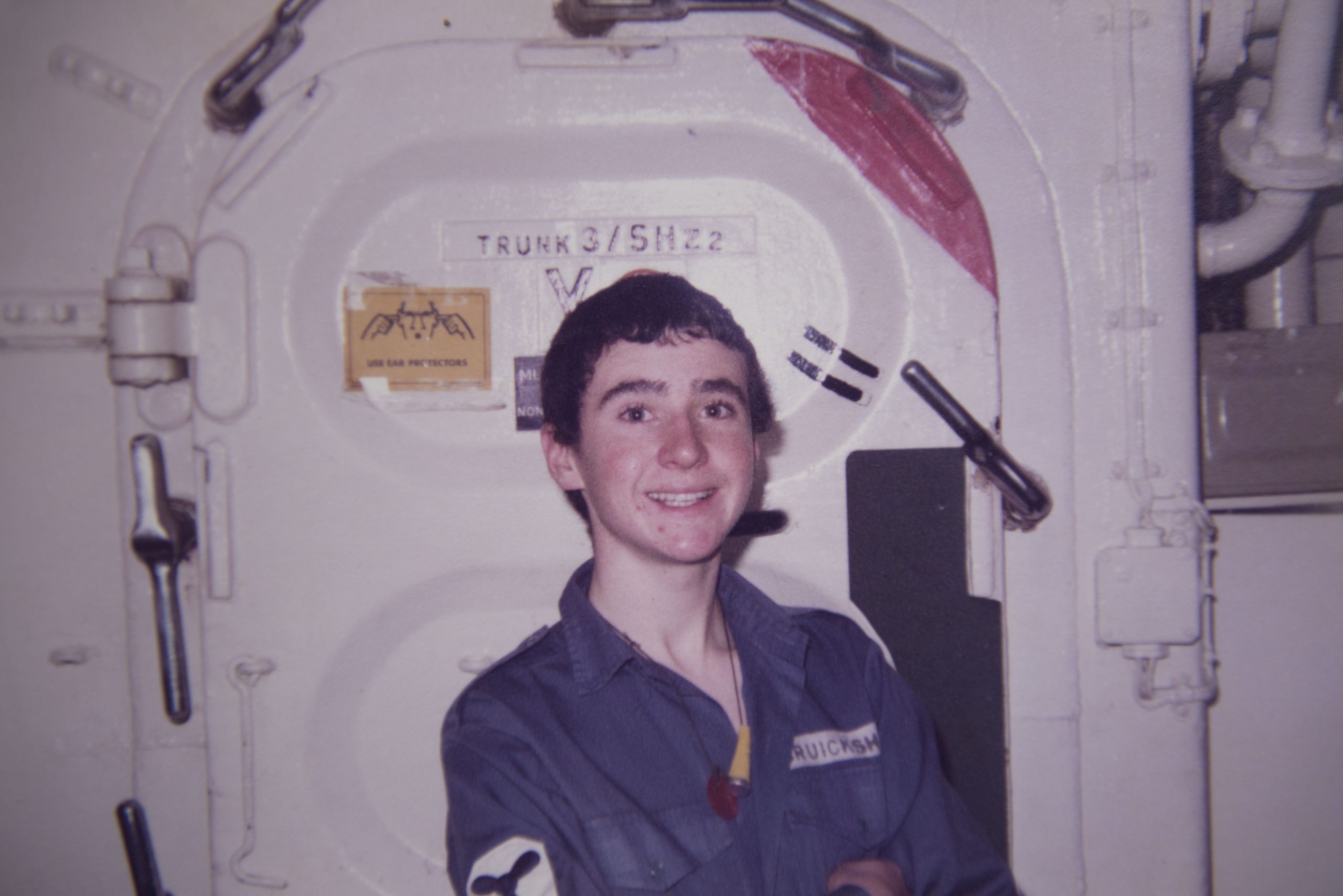 A series of portraits of Falklands veterans has been launched to tell their stories as Scotland marks the 40th anniversary of the end of the conflict today, June 14th.

The work has been released ahead of a national remembrance parade and service in the centre of Edinburgh on Saturday, June 18th.

David Cruickshanks (main photo) 57, a former Marine Engineering Mechanic from Glenrothes, Fife, was the youngest Scot to serve in the Falklands at the age of just 17. Shortly after signing up with the Royal Navy, he was asked to join HMS Fearless at the last minute after another crew member fell ill.

After arriving in the Falklands, David’s first tasks included sailing round San Carlos Bay in a small boat dropping charges into the water to deter Argentinian frogmen. He remembers transporting troops ashore, and seeing the sky light up during the Battle of Goose Green. After the ceasefire they received a hero’s welcome in Port Stanley, but had a close call after accidentally walking through a minefield.

HMS Fearless lost six crew members during the conflict, and David says he will never forget them. He went on to become a press photographer and stand-up comedian, and now helps other veterans as a peer support worker. He now lives in Strathmiglo, Fife, and has recently published a book, Stayin Alive: How PTSD (Nearly) Stole My Life. David is pictured at age 17 on HMS Fearless. 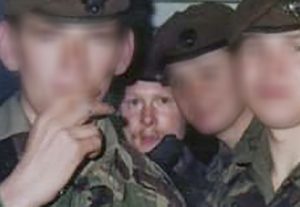 Graham Hopewell, 59, originally from Glasgow, was inspired to join the Scots Guards as a teenager drummer after seeing their band play for the Queen’s Silver Jubilee. He was sent to the Falklands as part of 5 Infantry Brigade aboard the QE2, and remembers bitterly cold conditions and barren landscapes reminiscent of the Scottish Highlands.

Shortly after arriving at Bluff Cove on June 8th, Graham witnessed the Argentinian air attacks which killed 50 Welsh Guards, including several friends. During the Battle of Mount Tumbledown on June 13th, he was “in the thick of it” assigned to protecting commanding officers. Pinned down under sniper fire for most of the following day, he did not learn of the ceasefire until mid-afternoon.

Graham stayed in the Scots Guards for nearly 24 years, moving to the Transport Platoon, and being promoted to a Corporal. He now lives in Ayrshire with his wife and works as an undertaker. (Graham is pictured at the back on the QE2 leaving for the Falklands.) 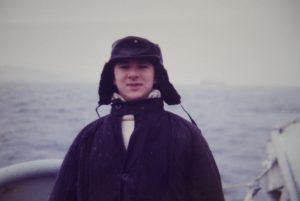 Graham Walker, 61, served as a Leading Seaman (Radar) on board HMS Yarmouth during the Falklands conflict. He joined the Royal Navy as a 15-year-old school leaver as he wanted to “see the world” and was looking forward to deployment in the Far East and Australia when their ship was ordered to turn around and head for the South Atlantic in April 1982.

Aboard the “Crazy Y”, Graham remembers freezing conditions and the constant threat of air attack, as well as “pummelling” Argentinian forces and going to the aid of ships in distress.

He served in the Navy until 2000, going on to become a lecturer in business at Carnegie College (now Fife College). Graham is now retired and lives on a smallholding in Burntisland, Fife, with his wife Marion. Graham pictured off South Thule in the South Sandwich Islands June 20th 1982. 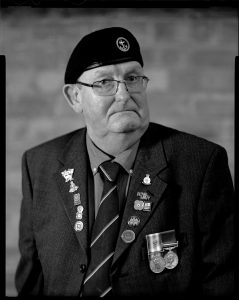 For Kenny Duffy, 63, from Largs, Ayrshire, the sea was always part of his life, and he joined the Royal Navy shortly after his 16th birthday.  As an Able Seaman, he served aboard HMS Antrim, one of the first ships to arrive at South Georgia in April 1982.

Following the sinking of the Santa Fe and surrender of Argentinian forces, they joined other ships in the task force at San Carlos Bay. The crew had a narrow escape when an Argentinian plane dropped a 1000 lb bomb on their ship, but fortunately it didn’t go off. Shortly afterwards, he saw HMS Antelope blown up with the loss of five lives.

Kenny described the war as “90 per cent boredom and 10 per cent sheer terror”. He went on to serve around the world before leaving the Navy in 1990. He now lives in Edinburgh and works at Lady Haig’s Poppy Factory. 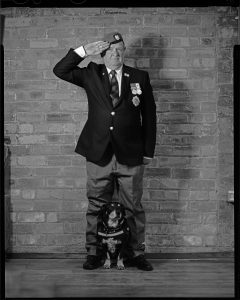 Donald McLeod, 63, from Edinburgh, spent his childhood traveling with his father in the Royal Transport Corps, and joined the Scots Guards aged 19. He was carrying out public duties in London, when they were told to prepare to sail for the Falklands.

Shortly after landing at Bluff Cove, he saw “jets come from nowhere”, hitting Sir Galahad and Sir Tristram, costing 50 British lives. Donald went on to fight the battle of Mount Tumbledown in the early hours of June 14th. He described nine hours of hand-to-hand fighting in pitch blackness and freezing conditions, during which eight fellow Scots Guards were killed.

Donald struggled with post-traumatic stress disorder after leaving the Army several years later, but managed to turn his life around with help from Poppyscotland and other charities. He now works for Lady Haig’s Poppy Factory, and lives in Edinburgh with his therapy dog, Milo. 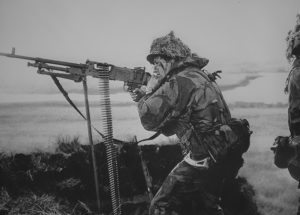 Drum Major Willie Urban, 65, from Newtongrange, Midlothian, joined the Scots Guards when he left school as he “didn’t want to go in the pits” like his father. As part of the 2nd Battalion, he was sent to the Falklands aboard the QE2 in May 1982.

On June 8th, he was stationed in Bluff Cove when the Argentinian air force bombed ships anchored close by, killing around 50 members of the Welsh Guards. Willie and his comrades fired at the planes as they flew overhead, bringing several down. They then continued on to Mount Tumbledown as part of the defence platoon.

Willie served for 22 years, including as a drum instructor at Guards Depot, Surrey. He returned to live in Newtongrange with his wife, and now works in Lady Haig’s Poppy Factory in Edinburgh. (Picture of Willie during the Falklands War in 1982). 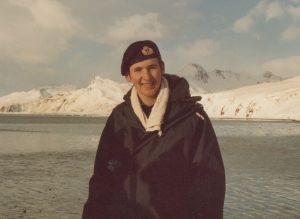 Rear Admiral Mark Beverstock, 58, joined the Royal Navy as a school leaver as it was a chance to get paid to go to university and study engineering.

As one of two trainee officers aboard HMS Ambuscade, Mark had to quickly learn on the job, “mucking in” and helping where required. The crew joined the British task force, protecting “high value assets” and escorting ships into San Carlos Bay, nicknamed “Bomb Alley”.

He remembers frequent Argentinian air attacks, with Exocets (missiles) flying overhead, and going in to provide assistance after SS Atlantic Conveyer was badly damaged. As British troops advanced towards Port Stanley, they provided naval gunfire support to the troops on the shore.

Mark went on to join the Royal Navy Submarine Service, serving 37 years and being promoted to Rear Admiral. He now lives in Kilmacolm, near Glasgow, with his wife Morag, and leads the Naval Ships Delivery Group as part of the civil service. He is also President of Poppyscotland and Legion Scotland. (Picture of Mark in the Falklands during the conflict in 1982).