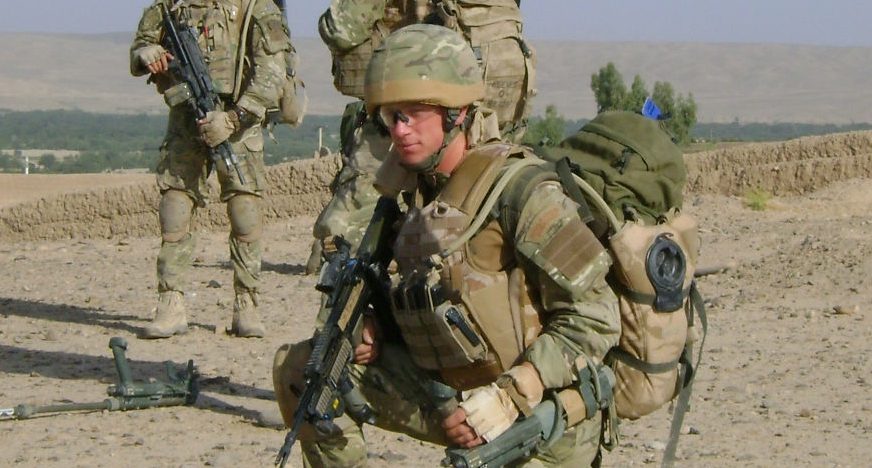 As my son prepared for deployment to Afghanistan, he asked me to be his next of kin. By Friday 21 May 2010 he had been on tour for two months.

I had just returned from walking the dogs when the doorbell rang. I retraced my footsteps through the back gate to save removing my muddy boots and as I approached the front of the house, I caught sight of two men looking at our front door, waiting for it to be opened. They introduced themselves.

One was a Royal Marine Lieutenant Colonel, acting as the Casualty Notification Officer, the other was a Padre – both wearing suits.

They told me that our son was very seriously injured. Shock overcame me as they escorted me indoors. They continued to relay what information they had. On the front line, the Royal Marines were searching for a wire leading to an Improvised Explosive Device when it exploded. Our son’s injuries were extensive. He was having life-saving surgery at Camp Bastion but I should prepare for the worst. His survival was unlikely. The troop’s corporal had been killed in the same blast.

Clusters of words circled in my mind that I remembered my son saying before deployment. “I’m well trained; I’m battle-ready; it’s what I’ve trained to do; I’ll be fine Mum.”

I bowed my head focussing on my feet. It was an attempt at blocking out reality. Icy cold fear crept from my head to my toes.

The Casualty Notification Officer explained that there was a 24-hour curfew preventing the media from reporting this incident. I had to reach family and friends within this period. I prepared to phone my husband, not in the city, not nearby but thousands of miles away as captain of a merchant ship.

The first attempt failed – I was cut off. The satellite was probably in the wrong position. The second time worked. I heard his voice. My heart melted. I tried to tell him the news gently. I wanted to hug him, comfort him, to tell him that we would get through this together. If our son should die, the Casualty Notification Officer explained he would return in full military uniform to tell me.

That long night I barely breathed as I listened for his footsteps on the drive. I began to plan our son’s funeral – preparing for the worst was my coping strategy. The underlying meaning of ‘next of kin’ began to dawn on me.

All I could do was wait back here.

My life had been taken over by those who organised the wounded survivors and their families. Saturday 22 May I was whisked up to Birmingham to wait his arrival from Camp Bastion via Kandahar on one of those immense aeroplanes – A & E in the air.

Like many other seriously injured service personnel he would have had his team of doctors and nurses around him throughout the flight. Resuscitated several times, he survived the flight home heavily sedated. I learned a few months later that after his surgery, a nurse had sat by his bed in Camp Bastion. Knowing this made a massive difference. It was a place I felt I should have been, by my son’s side, but that was impossible.

Once back in the UK, after a short stay in Selly Oak Hospital’s intensive care and several weeks on the military ward in the new Queen Elizabeth Hospital in Birmingham, he made a phenomenal recovery. In one month he was ready to leave hospital to begin his four-year rehabilitation at Headley Court initially then at Hasler, Plymouth. He is now working full-time, something that at the outset we never believed would be possible.

I withdrew from life.

To nearly lose our son naturally impacted me hugely. I lacked support and understanding of what I was going through, resulting in suicidal feelings. I wasn’t sure what to do nor did I want to live feeling like I did, but lacked the courage to say. I felt I was being dragged along the seabed, with an overwhelming sense of drowning.

Over the last seven years, life has dragged me back to reality. I have discovered various ways of recovering. Walking the dogs, writing and eventually talking have been some of the most effective ways forward, together with attending Ripple Pond support meetings. These meetings validated my journey; gingerly verbalising my thoughts and to have them paraphrased by others who truly understood my situation made the world of difference. I felt safe, I felt heard. I slowly began to take control of my life and began to live again.