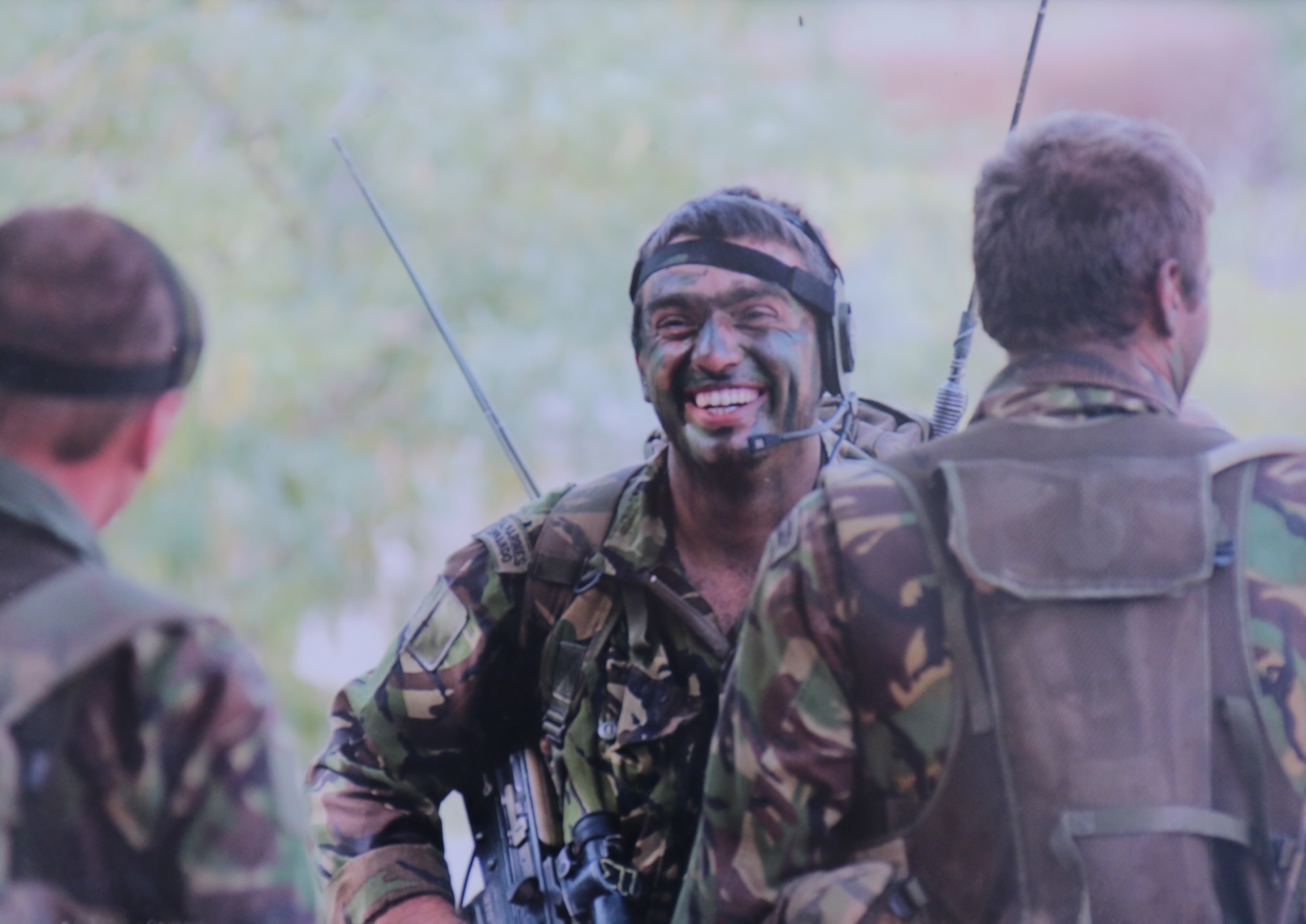 How one veteran got revolutionary treatment for tinnitus

The funds provided to these programmes have now been fully assigned and the Royal British Legion’s Veterans’ Medical Fund Programme is not accepting new applications.  Please contact medicalfunds@britishlegion.org.uk, or call our contact centre 0808 802 8080 if you are a past applicant with a query.

Harris was on tour in Afghanistan when his Land Rover drove over an Improvised Explosive Device (IED).

The blast shattered his left leg, shin and ankle, broke his right foot, ruptured both his eardrums, and caused brain damage.

Harris in Helmand, a few weeks before he was injured.

His leg would heal over time, but the damage to his ear drums resulted in tinnitus – a condition where people affected hear a ringing, hissing or whistling sound in one or both of their ears or head not linked to any external source.

“The blast ruptured both ear drums,” says Harris, “and the audio processing part of my frontal lobe was damaged in the blast as well.

“Having both a head injury and a physical injury to both ears is so complicated because if it’s just hearing loss it’s quite easy to rectify, but when you’ve got an audio-processing injury as well it’s been hard. It’s physically draining and tiring. I spent two years having three or four appointments a week.

“With hearing loss you can use hearing aids, but with tinnitus there is no cure and that’s the biggest frustration. I got it to a level where I could live with it, but it never went away. Then after a medication mix-up last year after a knee operation I had a bad reaction and my tinnitus just went through the roof.

“For about a year it really was ruining my life. I couldn’t get out, I couldn’t tolerate people around me and I was desperate. I knew what was available on the NHS and I had tried it all before. 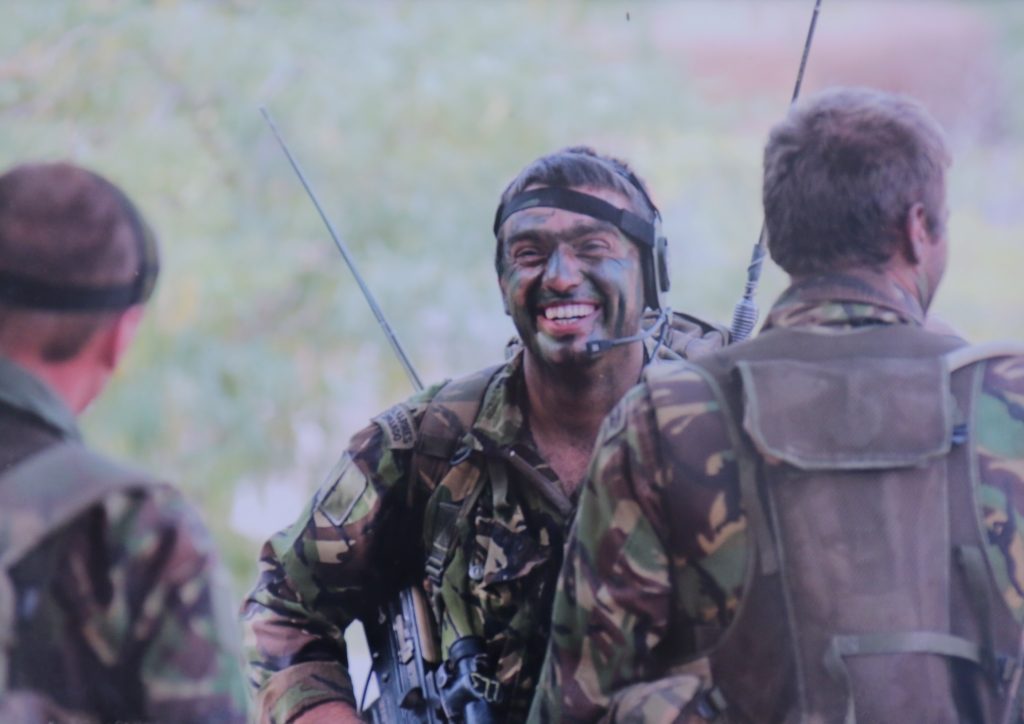 “Tinnitus is like having a dentist drill constantly in your ear. Just imagine walking around with that. You’re trying to work, trying to listen to people and all you can hear is a high-pitched whine, constantly – and that’s just during the day. Now try sleeping with it at night – you can’t.

“Obviously then your sleep gets affected which means you start off the next day badly. You can’t relax because there is a constant high pitch whine there. It’s so intense that it’s actually physically painful as well.

“You can never have peace and quiet again. You are always on edge. It’s exhausting and mentally tiring.

“People can’t see it so they don’t understand why you’re in pain or why you can’t tolerate people speaking to you, and that’s the biggest frustration.”

“I didn’t know about the Veterans’ Hearing Fund,” says Harris. “If I’m honest I didn’t know a lot about what it could offer until I discovered that The Royal British Legion funded hearing treatment. It’s fair to say that the treatment – and indeed the Legion – has given my life back to me.”

In 2017 Harris was the first veteran in the UK to be treated through with the revolutionary ‘Levo’ treatment. This uses iPod technology to administer treatment while he sleeps. The Legion funded the treatment through the Veterans’ Hearing Fund (VHF), which is part of the Veterans Medical Fund. 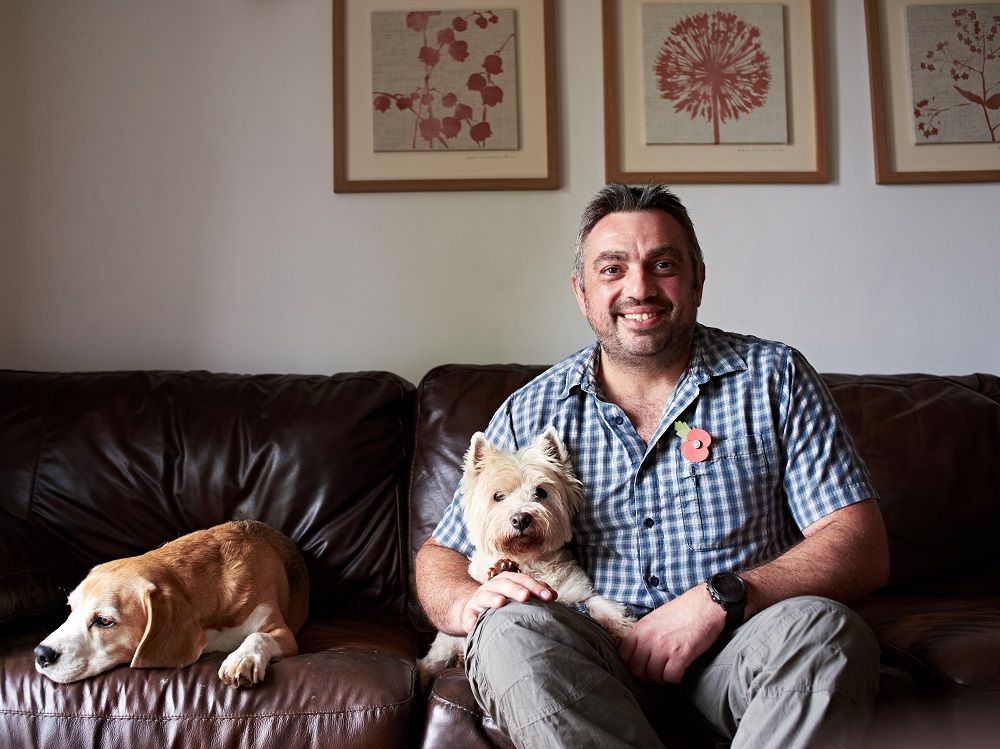 Harris at home with his dogs, Herrick and Snowy.

The VMF was set up in 2015 in response to research published by the Legion that showed working-age veterans are 3.5 times more likely to suffer from hearing loss than the general population and are funded through a £13m commitment from HM Treasury using income generated from the Libor rate-fixing fines.

“The Legion has helped to change my life for the better. If I’m honest I didn’t know a lot about what it could offer until I discovered that the charity funded hearing treatment. It’s fair to say that the treatment – and indeed the Legion – has given my life back to me.”

“The Royal British Legion is out there supporting me by paying for the treatment, and I’d encourage anyone in my position to make the most of the help. The Legion is here for us whether we’re young or old and that’s a wonderful thing.”

Help from The Legion

Steven Baynes, Head of Social Policy & Grant Giving at The Royal British Legion, said: “Tinnitus amongst Service personnel and veterans is poorly understood, and it is likely that many are suffering in silence, unaware of the support that may be available to them. While there are a number of treatments available for tinnitus, it is often difficult to identify the appropriate treatment for each sufferer.

“The Royal British Legion is delighted that the treatment Mr Tatakis has accessed through the fund has made his condition more manageable.

“Conditions that affect someone’s hearing can have a profound effect on career prospects, family relationships, social life and mental health. The Veteran’s Hearing Funds enable the provision of vital equipment, treatment and courses that we hope addresses the affect that hearing related conditions have on veteran’s well-being.

“The funds’ main aim is to minimise disadvantage and make everyday life easier.”